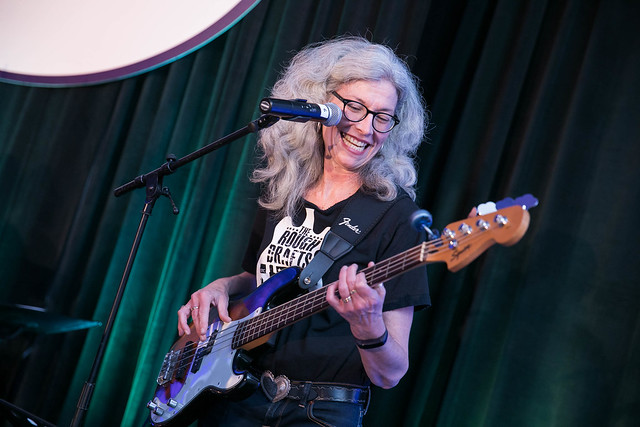 The #TechComm Leader for American Woodmark in Winchester, VA, Viqui is passionate about continued education and lifelong learning for those in our field. She loves sharing the tips and tricks she has learned in her 20+ years as a writer, and is actively promoting networking with other writers to help us all learn and stay connected.

An engineering graduate from Virginia Tech, Viqui switched to Technical Writing in the 90s for the flexibility and interpersonal connection that our field offers. She has worked for IBM Federal Systems in Manassas and BMC Software in the Dulles Technology corridor before moving to the Shenandoah Valley in 2002.

In her free time, Viqui plays bass in several bands including Hot Flash, a band of mothers who rock out in clubs throughout the DC area. Viqui and her husband Keith have a bluegrass band called the Dill Pickers and are sometimes joined on drums by their son Jim, another grad of Virginia Tech. The Dills have been married for 30 years and live on five acres just outside Winchester, VA. Viqui describes herself as “Technical writer, wife and mom, bass player, worship leader, I’m happiest when folks sing along with me.”

Viqui would love to connect with you. Email her at social_media@stcwdc.org, follow her on twitter @viqui_dill https://twitter.com/viqui_dill, connect with her on Linked In http://www.linkedin.com/pub/viqui-dill/15/79/7a5, or make her your friend on Facebookhttps://www.facebook.com/viqui.dill.

Here’s what I say about myself on the Dill Pickers website:

As a child, Viqui Lynn Brown Sherman Dill had dreams of becoming a famous rock star, and began taking piano lessons at age 7. By junior high, Viqui was leading others in song with her 12 string guitar and writing music in the suburbs of Charleston, West Virginia, playing flute with the George Washington High School band. Later, Viqui’s family moved to Bridgewater, New Jersey and Viqui began writing songs for her church Youth Choir, which she helped to form and co-lead.

In 1991, Viqui received an electric bass as a Mother’s Day present and began playing with bluegrass and country bands in the Washington, DC area with her husband, Keith Dill. They have opened for such diverse acts as Sawyer Brown, Shelby Lynn, the Coasters, Taylor Dane, Charlie Waller and The Country Gentlemen, Ronnie Reno and the Reno Tradition, and Continental Divide.

An engineering graduate from Virginia Tech, Viqui is happiest as a small group worship leader or surrounded by singing kids at Vacation Bible School. She works as a Technical Writer for American Woodmark in Winchester. The Dills have been married since 1987 and have a son, Jim.